The megapixel value is simply a shorthand means of expressing the camera's image resolution in a single figure.
Multiply the horizontal resolution by the vertical resolution to arrive at a value which expresses the total number of pixels that the image device can deliver.
Because this multiplication, typically of thousands times thousands, results in such a large value we use the term mega (indicating 10 to the power of six, which is 1,000,000) to express the result.

CIF, QCIF, 2CIF, 4CIF. Sounds like a bad nursery rhyme, right? If your eyes glaze over when you hear terms like these you are not alone. 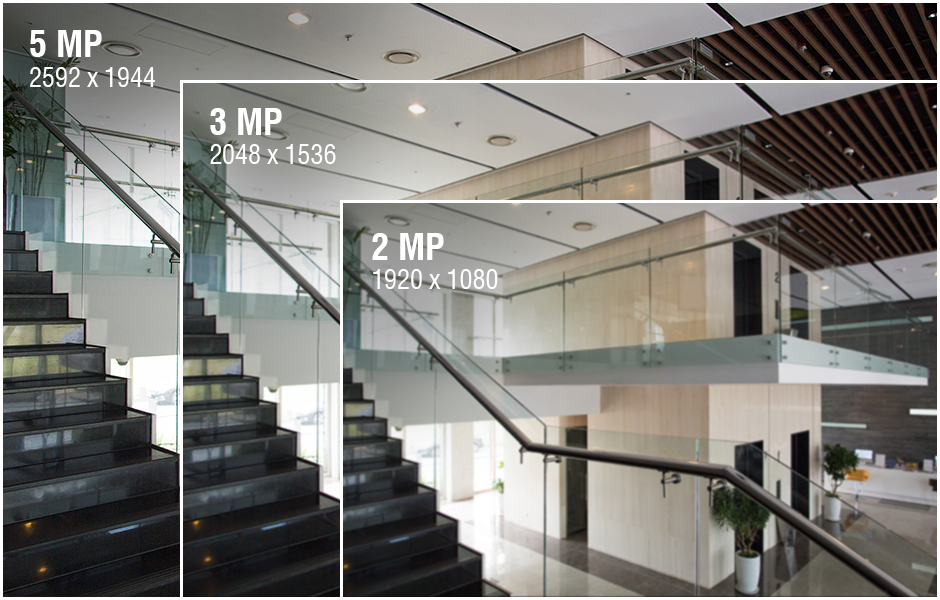 One of the most common questions we get is "What resolution camera should I buy?" Of course, it depends. Each camera in your application may require a different resolution. It comes down to how much detail you want, what platform (if any) you already have in place, and how much is your budget. Examples of applications where you can easily justify spending more for higher resolution are recording monetary transactions, desiring facial recognition, or reading license plates.

Q. What is an IP Camera?

IP stands for Internet Protocol. An IP camera is a digital video system that can transmit data over a network. These systems work with mobile devices so that you can view your security feed from anywhere with an Internet connection. IP cameras may also be referred to as network cameras or webcams.

In a traditional security system, data is transmitted through a cable to a DVR (digital video recorder). With an IP camera, the Internet is used to transmit digital video. The unit contains everything it needs to do this. It’s connected to your network much like other external IT equipment like a printer. To store video, your IP camera may contain storage in-unit or it may transmit video to a device also connected to the network to be stored, also known as a network video recorder (NVR). Digital cameras and IP cameras capture images the same way, although the transmission method is different. Your quality won’t be compromised with an IP camera—in fact, the resolution is better.

Q. What Type of Network Connection Will I Need for an IP Camera Surveillance System?

You can use either a physical router for your network (wired) or a Wi-Fi connection (wireless). Wired networks tend to be more secure and reliable, although Wi-Fi is easier, it leads to the increased need for security. Surveillance Secure can help you encrypt these networks and customize a wireless network to minimize chances of any problems with a Wi-Fi setup. You may also choose to use a cellular network, which tends to be safer than Wi-Fi, but also slower. Surveillance Secure can discuss your options with you to determine which one would be best for your custom setup and security needs.

Q. What Components Will I Need for This System?

For an IP surveillance system, you’ll need the actual IP cameras, an NVR or other type of storage system, accessories such as a microphones and speakers generally will come built into the cameras so additional parts will not be required. At Surveillance Secure, we can help determine your needs and set you up with the best equipment for your budget.

Q. What Are the Advantages of IP Surveillance Systems?

They offer: · Higher resolution · Easy install · Improved capabilities for the cost · Faster and more reliable · Easy to manage · Easy to meet IT compliance regulations · And more!